I have been feeling a huge weight on my shoulders for the last two-ish months. Right after H’s four month check-up I started to hear and feel pops in his little hips. This instantly terrified me because I remembered at his two month check-up our pediatrician telling me its ok if any part of a baby pops except their hips. Being the anxiety filled human being that I am I immediately began to panic. The hip click typically means your child has hip dysplasia, but in the lucky cases it could just be a ligament thats noisy when it moves. I wanted to believe it was the ligament, but I couldn’t help but worry that it was hip dysplasia and my sweet, wiggly baby boy would have to be in an awful, uncomfortable cast/harness.

My fear was even greater when I heard that hip dysplasia can be genetic. I had hip dysplasia diagnosed when I was still in the hospital after being born. Knowing this, I was sure H had it. My heart shattered and I’ve literally spent the last two months with a pit in my stomach.

On Monday H had his six month well-check and our pediatrician, who already knew of my concerns about his hips and had even briefly checked them before told me I needed to take H to get an x-ray of his hips this week. This was terrifying to me because I felt like it meant he had it. Which really is silly because twice the pediatrician said he was fairly confident it was just a loud ligament and not dislocated hips. But still, its in my nature to worry unnecessarily – so worry unnecessarily I did.

This morning I took H to the hospital to finally get his x-ray. I was nervous, but also really excited (i don’t feel like thats the right word) to learn if this was really what I was fearful that it was. The x-ray went very smoothly. H was so cooperative and went right a long with the whole ordeal and didn’t put up any kind of struggle. He’s a good one, I tell you. He looked so sweet, innocent and tiny on the x-ray table it made my heart burst. Gosh, I love him.

Our x-ray technician was awesome. He worked so well with H and was really good to explain everything to me and explain that he wasn’t being exposed to a dangerous amount of radiation and so fourth. It definitely helped calm a piece of my worried heart.

We came home from the x-ray and I very impatiently awaited the call from our pediatricians office to tell us the results of the x-ray. I laughed because I could barely sit still due to overwhelming amounts of anxiety, and there was H, konked out on the floor – clearly not as nervous as his mom was. 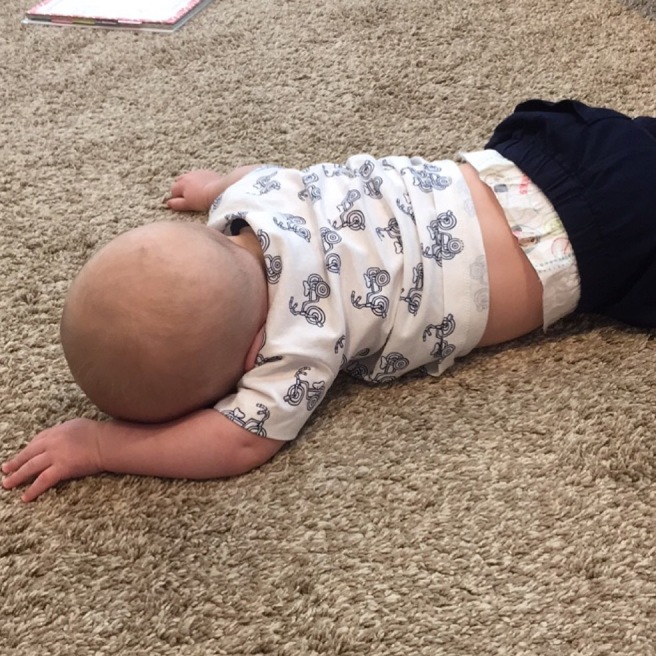 I’m THRILLED to say that a couple hours ago the doctor called and THERE WERE NO HIP ABNORMALITIES FOUND! Oh, hallelujah!

I know in the long run its nothing that major – if the worst happened he would have to have a hip surgery. I know compared to some peoples struggles thats nothing at all. I totally get that. But I still was fearful of the possibility of my six month old having surgery, or even having to wear this cast that just looks miserable – especially since H is such a wiggler. He’s my baby and I want the best for him. I’m his mom, thats my job to worry for him and hope and pray the best is what he gets, you know?

Seriously though my heart got 1,000x lighter when I heard the good news and I couldn’t wait to tell H and Wild Man and our families. Prayers were answered today and I feel so good and happy about it I couldn’t go without sharing.

Baby bath time! 🛁
At the beginning of the school year, my oldest really struggled being away from me for so many hours of the day (the transition to half day kindergarten to full day 1st grade isn’t for the faint of heart). Every night before school and every morning he was miserable, just dreading the time away. It about broke my mama heart into pieces!
This morning Em came up to me and said, “tell me about the first time I ever went to Disneyland.”
Making time for sunshine ☀️