You guys, I almost posted a picture of my pregnancy test from when I found out I was pregnant with H on this post – but then I realized that was a stick that at one point was covered in my urine and promptly decided against that. Its never bothered me when other people post a picture of the test, but apparently doing so myself is not my jam.

Today I was reading through a journal I kept while I was pregnant with H. I cried more than I care to admit because being pregnant was AWESOME even though I was sick 100% of the time, had gestational diabetes and was so uncomfortable. Its actually very easy for me to look past the gross stuff and think about the amazing stuff that was happening inside my body. Isn’t it crazy we are capable of GROWING a HUMAN?

A few particular entries in this journal were dedicated to the days we announced to our families we were pregnant. I learned something from this. I am not creative. Wild Man is. Keep reading, you’ll see.

Neither of our moms got a cool announcement. Turns out my mom already knew because she could tell I was different and was picking up on my symptoms and my mother-in-law guessed. So neither story with them is all that exciting..

Somehow we decided I’d decide how to tell my family and Wild Man would decide how to tell his. There are always those huge, grand announcements and I applaud them, but thats now how it worked out for me. I can’t even remember why but I ended up announcing to my family in one of the most boring, un-energetic ways possible (probably because I was too sick, tired and lazy to put forth effort anywhere in life?).

I had a picture on my phone of the pregnancy test. Every once in a while my family will sit around the tv and take turns throwing pictures up on to the tv via Apple Tv. One night we decided to start showing pictures and videos and in the middle of it I threw a picture up there. The picture of the test. It took a second for my dad and sisters to register what it was. (my mom already knew). I think my dad was the first to notice and I still have the look on his face in my mind – pure joy! Both of my sisters were quiet because they’re freaking adorable and got emotional. It was so cute. They were so excited. In my family H is the first grandchild and niece or nephew, so he was so, so greatly anticipated.

Like I said, Wild Man is 100x more creative than I am. He is also tons funnier. He is also talented with technology. All of those factors led to a much cooler baby announcement than I came up with for my family. Oh also his was lots more inappropriate than showing off a stick I stuck in my own urine.

He decided to make a video. Essentially it said in several different slides: When did it happen? We don’t know! Was it an early morning treat? An afternoon delight? Something in the night? We will never know. But one thing we do know… Our family is becoming a family of three. All while Marvin Gay’s ‘Lets Get It On’ is playing in the background and the sound of a squeaking mattress can be heard…

Embarrassing, yes. But very, very Wild Man. And it got the message across and led to some excited yelps and hugs. I still laugh/cringe thinking about this announcement.

We publicly announced our pregnancy on Mothers Day. It felt very appropriate and that was when we had hit either 12 or 13 weeks. We just did the usual post a picture on all our Social Media platforms. I pointed to my belly – which was proudly showing at this point (makes it very hard to hide a pregnancy) – and Wild Man held a sign announcing our due date, November 24, 2015. I’m laughing in it and Wild Man has a hilariously shocked face. 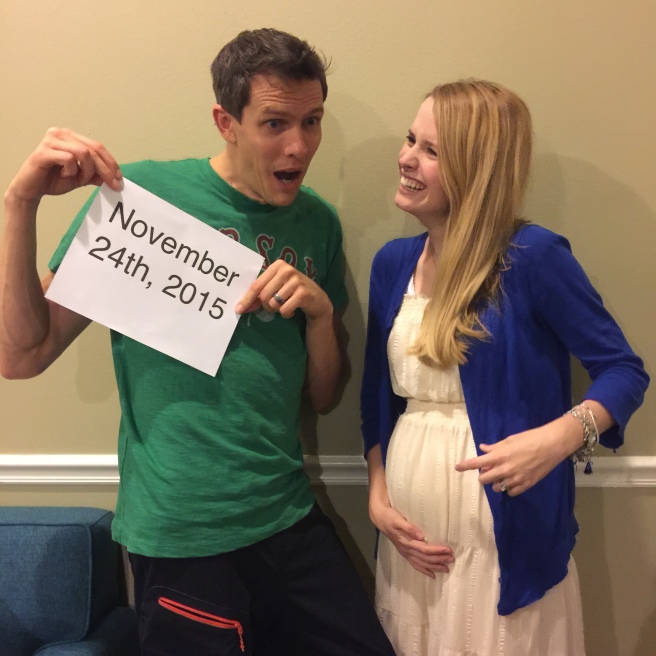 I guess this is where I sort of got creative. We found the gender out either in beginning of June or end of May, I can’t remember at the moment. Wild Man has a birthday in mid June and we always have a big birthday party at my parents house because they have a pool. We decided it’d be fun to somehow announce the gender at the party when both of our families are there together. We had everyone write down their guesses then before the pool party really started we had a gift bag and counted to three and Wild Man pulled a swimming suit (see the pool theme?) out of the bag. And it was a BOY swimming suit! I don’t know – is that creative? I thought it was fun.

Fun fact: I remember being terrified of having a boy. Having only sisters I had no idea what to expect – but I am LOVING it. 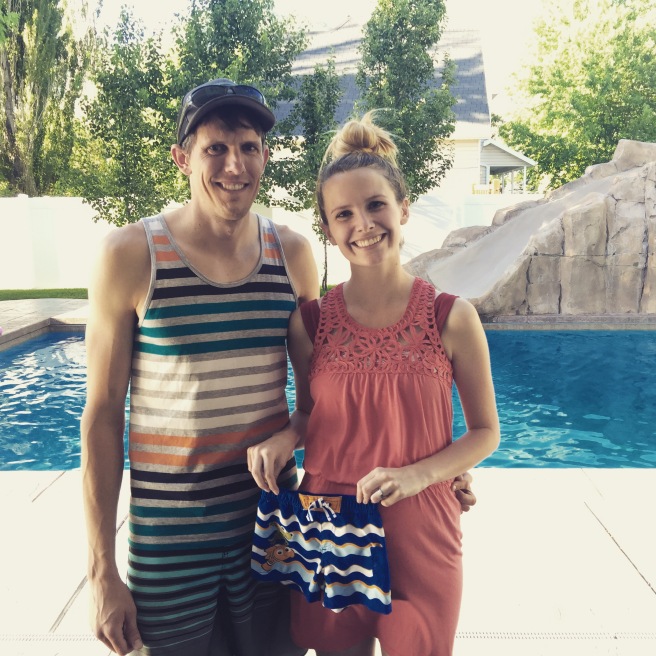 Now that we’ve done all the announcing and such, I’m already planning how to announce all these same things with baby #2 (not a pregnancy announcement) and I’m hoping to be more creative. But I can’t guarantee that it won’t be any less inappropriate because Wild Man will still be the dad and he’s gotta stay true to himself 😉