*WARNING: Also no surprise, this is a picture overload post. It was impossible for me to choose only a couple pictures I wanted on this post.

I really, really hoped that we could squeeze in a Disneyland trip before baby was born. Initially I was thinking September would be ideal but as it turned out, October was the only thing we could really make work. I knew it would be a little risky because in October I hit 8 months pregnant, but its gonna take a lot more than that to keep me and my family away from a Disney Park. We spent five days there and I can safely say that all five days were pure magic and happiness. They were also full of exhaustion and very swollen feet, ankles and legs – but thats besides the point.

We had Mickey’s Halloween Party the first day and it was great. Although can I say something slightly negative? I don’t feel like Disneyland’s candy was as good this year as it usually is.. If you ask Wild Man about this he will be very vocal about the lack of Butterfingers in our trick-or-treat bags. Besides that, no complaints. Disney knows how to do a Halloween Party. One of H’s current favorite movies is Monsters Inc and Monsters University so we decided that would be our costume theme this year. Wild Man was Sulley, H was Mike and I was Boo – which also meant I got to wear pajamas to Disneyland! What more could a giant pregnant lady ask for? Usually we make our Halloween costumes. I love handmade costumes because they are so personal and they are one of a kind. But this year we were just a little too busy and a little too sick so we reluctantly purchased these costumes (mine was pieces I found from Amazon). I was bummed about it at first, but they really didn’t turn out too bad. Wild Man’s costume cracks me up and H felt like the star of the show in his – so it was a success.

My cute sisters dressed up too. One was Jane Goodall and the other was Mia Thermopolis (Princess Diaries) and HOW CUTE ARE THEY?

There were four huge highlights of this trip for me.

I ate an absurd amount of treats on this trip. But thats what you’re supposed to do in Disneyland so I have absolutely no shame. 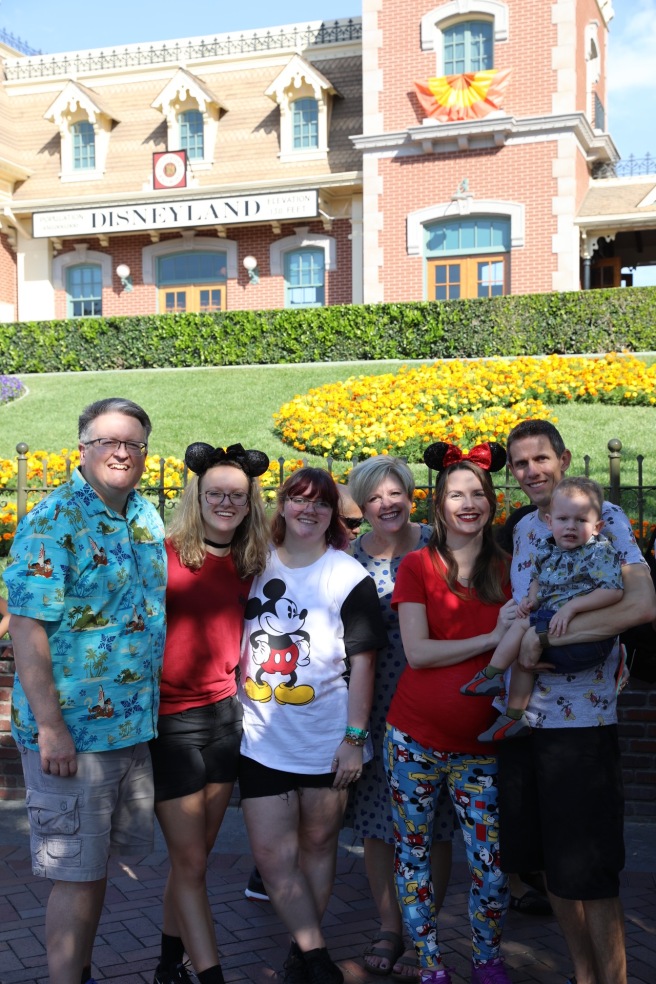 Because I was 35 weeks pregnant while on this trip, we decided to stay on the side of safety and have me use a wheelchair. It was kind of embarrassing, but it also saved me. My cute sisters were my chauffeurs most of the time and they are troopers!

Meeting characters was different this trip. In our past several trips to Disneyland H is all over the characters and very excited by them. This time he was much more timid and shy. He was still totally excited, but also needed to have a good grip on me the whole time while meeting them and wasn’t too keen on giving the usual big hugs that he has given them in the past. I thought it was so cute. 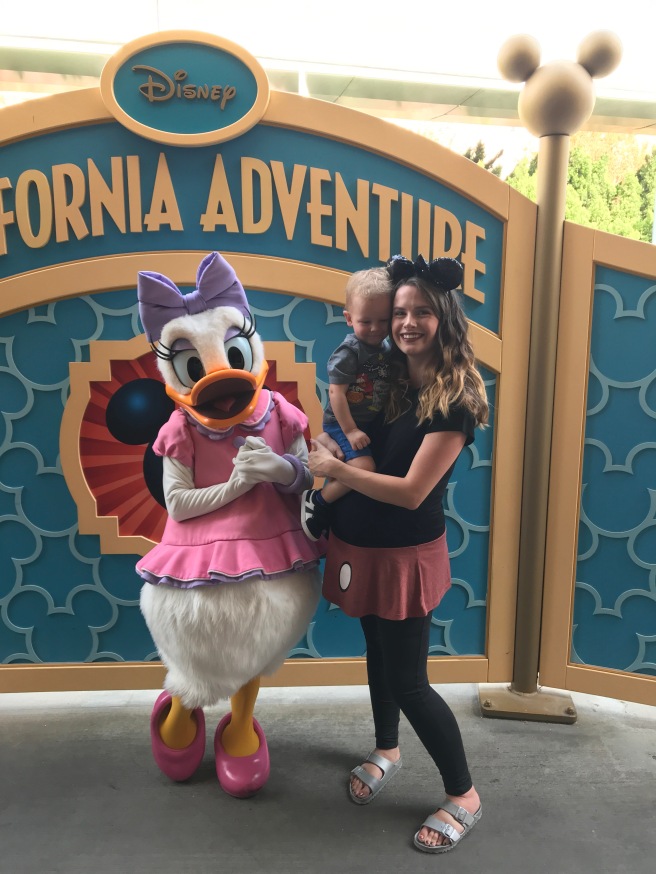 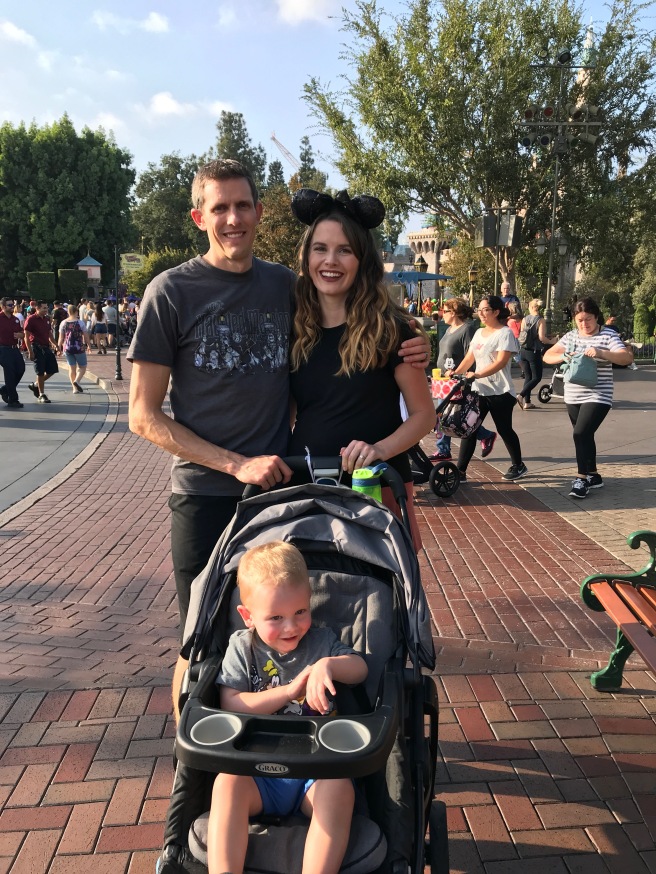 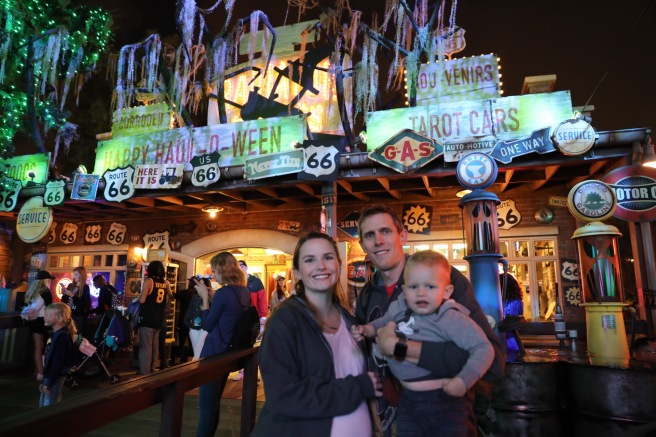 The picture below is one of my very favorites. H has this new thing where he roars at everything. A ton of our pictures from this trip include H roaring. My dad took the picture below and was standing under a monster decoration in Cars Land and H could not stop roaring at it and my dad. It cracked me up and the picture turn out so good! 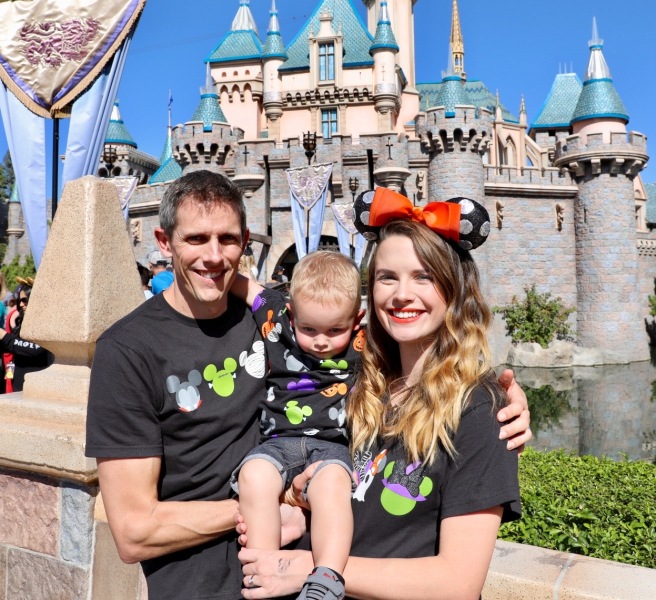 It was such a fun, magical trip. I know this post is a little spacey and all over. But I have some plans of doing more specific Disney posts in the future (maybe the far future because hopefully baby comes soon!!) but for now, here is my picture dump. Right now we are focused on finishing the last couple things up before little brother makes his arrival, but after those first few weeks of newborn heaven you better believe I’ll be chomping at the bit to get back to our happy place with our new family of four!

❄️❄️❄️
Taking time to CONNECT
I’ve got the best makeup artist in town 💕
Baths or showers?