*E turned one yesterday, so I figured I better finally share his birth story!

On November 10th, 2017 I woke up to find my baby was sideways in my belly. This wasn’t abnormal though. He hardly ever was head down like he should have been and was changing positions almost daily, even though he was big and we were super close to his due date. We referred to him as a ninja a lot. Wild Man predicted he’d be stubborn. I texted Wild Man and told him the baby was definitely sideways. I could feel his head on my right side and his bum on my left. He responded by telling me not to worry yet, “not like the baby is going to come today.”

Later that day we were invited to eat dinner at Craig’s parents house with his parents and brother. We went over around 6 and sat down to eat around 6:30. We hadn’t been sitting down for five minutes when all the sudden, I kid you not, the lights flickered and all the sudden I felt a strange, very wet sensation take over the lower half of me. I looked up (and locked in eye contact with my brother-in-law haha) and said, “I think my water just broke!” Except I’m not sure why I said ‘I think’, because there was no denying that was what this was. Baby time. We left H at my in-laws (ugh, I hate leaving my babies) and went to our house to grab our hospital bags and I changed my clothes.

When we got to the hospital they did that test to make sure your water really broke (it did) and I was admitted. My nurse checked me and said, “you’re dilated, but I don’t feel a head,” to which I told her he was definitely sideways. By this time my contractions were coming on top of each other. Ouch. They called for an ultrasound to check my babies positioning. Sure enough, he was sideways. Then my doctor came in to look at the ultrasound and he briefly considered moving him in my stomach (he’d done this a couple weeks earlier and it HURT), but decided that with the positioning of the umbilical cord, it wasn’t safe. I remember him checking me and saying he could see my babies bottom. He looked up at us and said, “I think the safest option is a c-section.” Without hesitation we agreed to it. Whatever is best for baby, you know?

Since E was essentially on his way out bum first, we were deemed an emergency c-section and immediately people were preparing for surgery. I was taken quickly into the OR where I got all prepped and got my spinal tap (which was amazing! haha). I was a little nervous, ok, very nervous, but getting relief from pain definitely helped me relax. Then we were ready to have this baby!

Everything was routine until the very end. My doctors told me later they almost never see this, but as they were removing E, his body was outside of me and his little head got caught in a contraction basically. By this time they’d brought a mirror to me to watch him be born, and I just remember being so happy to see him, but I was also scared. Why was my baby stuck? Also his body was gray. It was a lot of emotions.

Finally, he was freed! But he was gray and not making a sound. As quickly as I could lay eyes on him, he was gone to another room. They took him and my husband and left me alone in the operating room with a team of doctors. I hated it. Oh, I hated it. I wanted to see my baby! But most of all, I knew he was in the room next door and I wanted to hear him cry. I needed to know he was ok. My doctors were trying to keep my mind off of it, I could tell. I kind of remember them telling me I lost a little more blood than usual but I’d be fine. I don’t remember anything else they said. I was just listening for my baby, sad I hadn’t touched him yet.

It felt like forever, but finally from the room next door where he was being worked on by a NICU team, I heard him scream. And scream. And scream. Hallelujah! I was still being stitched up when Wild Man came in holding our little 8.5 pound bundle. He laid him on my chest/neck and E nestled his little face into my cheek. I could hear his little snorts and grunts right in my ear. Though I couldn’t really see him, I was so happy to have him with me. Touching me. Right where he needed to be. We snuggled there for a while and then they took him and Wild Man to the nursery to do all the little tests and what not, I remember they said they’d do extra tests on his lungs and breathing, since he wasn’t breathing at birth (all came back fine – he’s been totally fine and healthy since!) and I was still getting put back together. I was sad I couldn’t go to the nursery with them, because with H, I was able to. 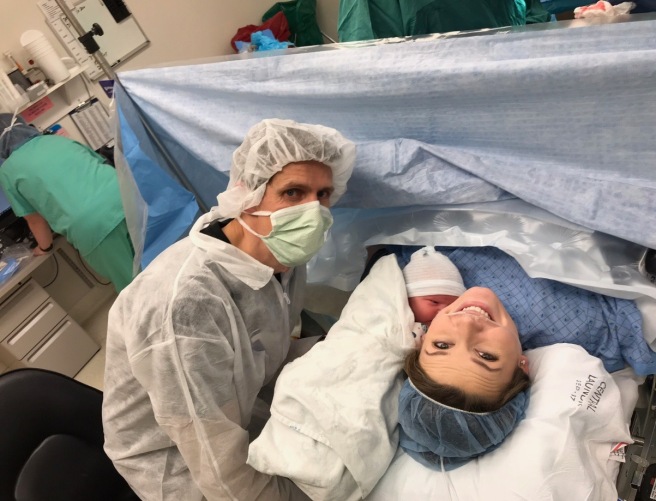 Once I was all finished, I was wheeled back to the delivery room, handed my phone and given some water. Then I just sat there. No baby to hold. It was a crappy feeling, but I was happy to know he was ok. Now I just wanted to hold him! I was so shaky and a little dizzy, but I started texting my mom since I had no baby to love on yet.

Finally, about 2 hours after having him, Wild Man and E came into our room and I got to hold that sweet, sweet boy. Its been heaven ever since. He immediately nursed like a champ, he was go-with-the-flow and happy, but made hilarious grumpy faces. He fit perfectly into our family and has given us so much joy and happiness since. 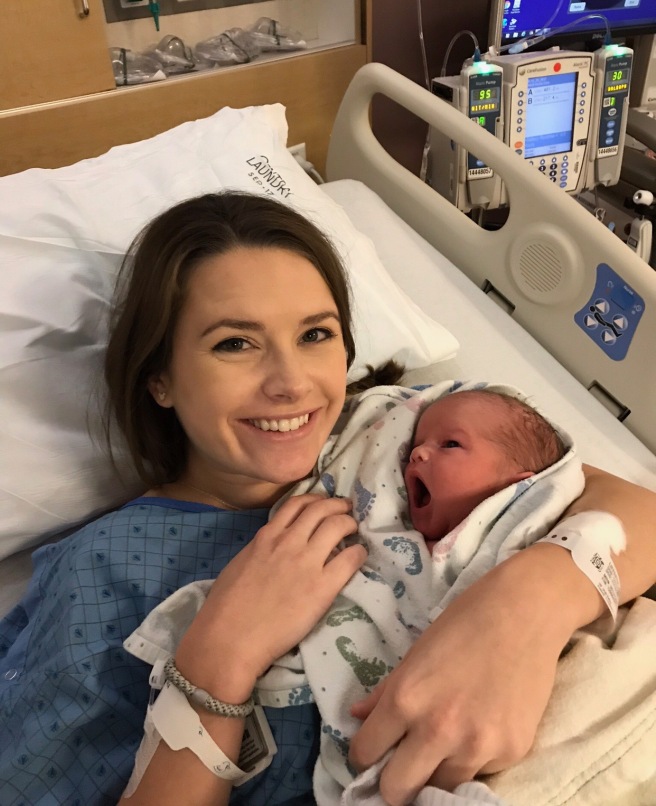 Hello!! I'm Chelsea, a wife and momma to three little ones and two dogs, living in the pretty state of Utah. I am a Master Esthetician, a small shop owner and a mental health and kindness advocate. I love to craft, create and do DIY projects. I love writing, making connections and scrapbooking. I love being a parent and am learning so much through this journey daily. I love sharing my life and my experiences and LOVE you guys for taking time out of your day to visit me. I think you are wonderful, worthy and you're definitely my pal for being here.

Just over here waddling more and more every second!
Proud parent moment or a parent fail?
🌸happy sunday friends🌸
All this sunshine is good for the soul ☀️☀️☀️